A Powerful Cliché: As writers we’re supposed to avoid clichés, but the title of this post happens to be a special one for me. There’s a lot of power in those three words. I’m living proof… for the moment. Allow me to explain by starting with a quote:

“Until one is committed, there is hesitancy, the chance to draw back. Concerning all acts of initiative (and creation), there is one elementary truth, the ignorance of which kills countless ideas and splendid plans: that the moment one definitely commits oneself, then Providence moves too. All sorts of things occur to help one that would never otherwise have occurred. A whole stream of events issues from the decision, raising in one’s favor all manner of unforeseen incidents and meetings and material assistance, which no man could have dreamed would have come his way. Whatever you can do, or dream you can do, begin it. Boldness has genius, power, and magic in it. Begin it now.” ~ William Hutchinson Murray

Unlike the title, that quote’s a bit long, but I still love it. I first read it in Steven Pressfield’s The War of Art in late 2003. It really resonated with me then and it’s only grown more meaningful for me since. If you’re wondering what the quote has to do with the title, I hope to show you in the next few paragraphs.

Moment of Commitment: Over the past holiday weekend, I found myself retelling the tale of our life-change. My wife and I had been discussing the possibilities for a year or more before we committed to moving to our cottage in the woods and dedicated ourselves to living a more fulfilling life together. I’ve written about it before, but the retelling got me wondering which of the events was the one that tipped the scales and nudged us past hesitancy. I think there was one particular inciting incident, and it may sound strange to those who’ve never truly loved a pet. It was the death of our beloved Maggie, in September of ’02. Although we didn’t leave our business and move to our cottage for another year, Mag’s passing was the tipping point. More on that in a minute. For now, suffice to say it was the day my wife and I started routinely using that old clichéd phrase: Life’s too short. The more we said it, the more sense it made.

Tragic Impetus: As sad as our dog’s death was for us, it wasn’t the actual beginning of our life-change. There was an evolution of mindset. I think that evolution may have begun on September 11, 2001. Such a strange and tragic day. The earth seemed to tilt off of its axis that morning, and for so many it took a long while for it to return to spinning as it once had. I’m guessing for some, it still hasn’t fully righted itself. I don’t personally know anyone who was wounded or killed that day, but it was a definite mindset shift. I won’t trouble you to explain the details, as we each have our own personal version of it.

A Movie? Really? Shortly after that mindset shift came the next in a series of life-altering moments. Again, it may seem trivial for those who don’t share my lifelong ardor. This next moment came in the form of the release of a movie. Yep, a movie. And a movie based on a fantasy story, at that.

On December 19, 2001, The Lord of the Rings: The Fellowship of the Ring debuted in theaters across the U.S. My brother-in-law and I went to the film’s first showing on Saturday the 20th. Beforehand I’d been skeptical. But I held a hope that the film would recapture my first favorite book. I remember sitting in the theater. The opening was a female narrator reading backstory. I still wasn’t convinced (although the footage of elves and men fighting orcs on the plains of Gorgoroth was pretty cool). But when the actual opening scene began, a panoramic view of the Shire, I was instantly spellbound. I whispered to my bro-in-law, “Does it look as good as you hoped?” He leaned over. “No,” he whispered. I turned and raised a brow. “It’s even better,” he added. We were grinning like idiots by the time Gandalf made his appearance.

So how was the release of Fellowship so life-altering? It reminded me of my former self. It reawakened the boy who had wanted so fervently to connect with story that he dared to imagine himself as the storyteller. I went home and immediately dug out my old box-set of LOTR and started reading. It was the first fiction I’d read in many years. I instantly fell back under the spell of well-told story.

Regained Perspective: Rereading LOTR helped me to make sense of a world that didn’t seem to make sense anymore. It reminded me of the real meaning of friendship and loyalty, of 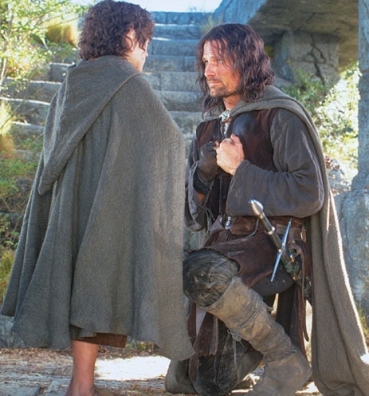 the importance of finding one’s own definition of honor in the face of death. For the sake of employment, I lived in a place I did not love, devoting much of my time and energy to earning a secure financial status. The Lord of the Rings reminded me of the significance of beauty and the exploration of emotions. It reminded me to appreciate a shared love. And of what the true ideal of home meant to me.

Canine Life-lessons: I mentioned the death of our Maggie earlier. When the day came, I was almost a year into the reawakening of my former self through rediscovering fiction. Saying goodbye to our girl was one of the most difficult and moving moments of my life. My wife and I both immediately knew things would never be the same afterward. She left us on a sunny autumn Friday morning. We couldn’t face going to work, so we drove to our cottage in Michigan, still in shock. When we arrived, before we even got out of the car, we were reminiscing about how excited Mag would get on the days we came to Michigan. She had known even before us—this was home. This was where we belonged.

Maggie had been with us through most of our successes in business. The presence of her spirit in our lives had been such a blessing—vital to our wellbeing during difficult years of hard work. But her life was over, and it had seemed so damn fleeting. Looking back on them, those years had been a blur. Because of her, we knew. None of the rest of it mattered. We belonged at home, exploring what really mattered, and finding it together.

Maggie taught us the true meaning of the words: Life’s too short.

Providence Moves: It was a bold step, leaving a lucrative business and moving to a cottage. But every step since we committed ourselves has been providential. In other words: “A whole stream of events issues from the decision, raising in one’s favor all manner of unforeseen incidents and meetings and material assistance, which no man could have dreamed would have come his way.”

The move home led to much more reading, including Steven Pressfield’s Gates of Fire. Which led me to his website, which led me to The War of Art, which led me to the above quote as well as this one: “Are you a born writer?… In the end the question can only be answered by action. Do it or don’t do it.” Which led to me scribbling the beginnings of a story in a notebook while I waited at a jobsite for the concrete subcontractor, about a Gothic boy who was a scion and the warrior-girl who was secretly his guardian.

The Providential Road Goes Ever On: From a tentative beginning, and through a mostly secret drafting of my trilogy, I was led to exploration of the craft and business of fiction. Which led to Writer Unboxed. Which led me to finding myself as a writer—and thereby as a person. As well as all manner of unforeseen incidents and meetings. Including some of the most wonderful and meaningful friendships of my life.

So those three words, life’s too short, the real wisdom of which was only learned because we gave our hearts to a dog, has led to all manner of insight and opportunities, the likes of which I could never have dreamed would come my way. So thanks, Mag.

What about you? Have you committed to a bold step? If so, has Providence moved for you, too?

[Black and white photo of Maggie by Mike Lanka, of Lanka Photo]