My mom doesn’t like Goths. Not that she’s ever really known one. But she seemed confused and displeased when I first told her my trilogy was rooted in the conflict between the Goths and Rome. I know I have really well-informed readers here, but on the remote chance you share her confusion (or displeasure), I thought I’d clear a few things up—as I tried to do for Mom. Hopefully, confused or not, you’ll find it interesting.

A Tale of Two Goths: Turns out my mom’s confusion was what led to her displeasure. I was talking about the Germanic Tribe of the Goths, and their cultural and sometimes violent clashes with the civilized world, represented at the time (during the first five or so centuries AD) by the Roman Empire. Meanwhile, my mom had conjured images of pasty-faced youths with blue lipstick and multiple body piercings, rolling out of bed at midday after a night of crazed dancing to industrial techno music to voice their opposition to the Roman Catholic Church.

I wrote an article for the homepage of my website called The Origin of Epic. In it, I reveal that my interest in the Goths began early, when I read that Tolkien’s Riders of Rohan were based on the Goths. When my school history courses covered the fall of the Roman Empire, the Goths, being the first to sack the city of Rome, were always among the featured antagonists. The seemingly divergent viewpoints (cool horse-warrior good guys vs. evil horde that helps to extinguish the light of the civilized world) led to an ongoing curiosity.

So when I mention the Goths, I’m thinking of Éomer son of Éomund, bearer of the sword Guthwine. Mom, on the other hand, is thinking more along the lines of Edward, wielder of

Roman Disdain/Admiration: One of the challenges I faced in featuring the Goths in my story was the lack of literary sources. Although roughly the same percentage of Goths were literate as Roman citizens (around 15%), alas the Goths left few surviving writings. The writings of Romans such as Tacitus and Marcellinus demonstrate a sort of love/hate fascination with the Germanics generally and the Goths particularly. Tacitus says they “…all have fierce blue eyes, long red or yellow hair, and huge frames apt for sudden exertion.”  Grave site analysis has borne him out on their size. Goth males were, on average, four inches taller than their Roman soldier counterparts. And as for the red or yellow hair, it was greatly admired back in the homeland’s cities. Blond wigs and hair dyes were all the rage in imperial Roman high society.

Although Roman authors speak admiringly of the Goths’ physical beauty, battlefield fierceness and valor, and chaste marital bonds, they also speak of their impulsiveness, lack of capacity for reason, and proclivity to sloth, drink, and gambling. Hmm, that last part sounds a bit like… just about every powerful group of humans speaking of their foe. 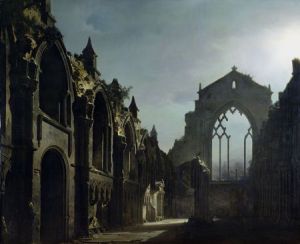 Goth as Pejorative: So I explained all this to Mom, and she was still confused. “If that’s true,” she wondered, “why then do these young goth kids whiten their faces, darken their lips, and blacken their hair?”

The answer, as it so often does, lies in literature—or, in this case, in a literary movement. But in order to understand the origin of Gothic literature, we’ve got to take a quick look at Gothic architecture. Gothic describes the architectural style of the middle to late medieval period. But the term was attached to the previous era’s style by the new architects of the Renaissance. They meant it as a pejorative—archaic, outmoded, severe and ungainly.

It’s Alive! By most accounts, the Gothic movement in literature started with a single book: Horace Walpole’s The Castle of Otranto: A Gothic Story (1765). Contemporary readers were enthralled by the book’s suspenseful weaving of the medieval setting and the supernatural trappings of the plot. So much so that the book instantly spawned hosts of imitators. And so a thriving genre was born, and Europe’s aging and ungainly gothic castles, manor houses, and monasteries became the setting for ghosts, monsters and the undead. Flash forward a couple hundred years, and fans of the creepiness still dress to suit the macabre underpinnings Walpole established. These fans are my mom’s preconceived Goths.

When Goths Were Still Cool: In 451, as the western Roman Empire slowly crumbled and at the urging of Emperor Valentinian III, a confederation led by the Visigoth king, Theodoric I, defeated Attila the Hun and his Vandal allies at Chalons, France. The Gothic kings had become central to the inner workings of empire. I mention this because, however you heard it in history class, the empire did not fall when Rome was sacked by the Goths under Alaric in 410 (also, did you know Alaric considered himself a member of the imperial military, and marched on Rome to demand his rightful status and pay for his men after fighting to defeat a Frankish usurper at the Battle of the Frigidus?).

Kings of a Score of Kingdoms for a Thousand Years: In tribute for their service to a failing empire, the Visigoth kings were ceded large tracts of imperial territory in Spain, southern France, and southwestern Germany. Shortly thereafter, the Ostrogoth Kings of the east were grabbing territory on the Italian peninsula and in the Balkans. For many centuries, the Spanish nobility self-identified by laying claim to being of the blood of the Goths. Because the Goths supposedly originated in Götaland, Sweden, until 1973 that nation’s monarch’s title was King of the Swedes, the Goths and the Vends.

At the Papal Council of Basel in 1434, the Spanish and Swedish delegations of cardinals clashed over the rights to sit closest to the Papal seat. It’s said the Swedes argued that since their forefathers founded all of the Visigoth and Ostrogoth kingdoms, they should sit closest to the holy seat. The Spanish delegation supposedly retorted that only the lazy and unadventurous Goths remained in Sweden while the heroic Goths conquered an empire and established their highest seat in Spain.

I’m pretty sure my mom’s preconceived Goths would never vie for such a spot.

Éomer of the Riddermark or Dracula of Transylvania? So what’s your first thought when you hear the word Goth? How ‘bout your mom? Do you think Goths will ever be cool again, or did I pick a (twice) doomed subject?

37 comments on “A Gothic Identity Crisis”