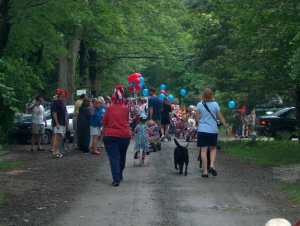 Hot Under The Collar: This past Wednesday was Independence Day in the U.S. For the resort area I live in, this is a high holiday—the highest day of the high season. Urbanites and suburbanites from nearby Chicago flock to the area to sun themselves, light off dangerous fireworks, and generally eat, drink and make merry. It’s like Christmas in July for our area business people.

I’ve shared quite a bit about the background of my writing journey in the past, most recently in the fun-tastic interview conducted by my friend Lara Schiffbauer for Motivation for Creation. But all you need to know for this post is that I started writing nine years ago, I shared that I was writing with very few others, and that I finished a draft of my epic fantasy trilogy in June of ’09. I have long struggled with publicly embracing my writer status. Since ’09, through beta readers and my online activity, most who know me have come to know of my writing life.

Which leads me to why I get uncomfortable on the Fourth of July. We have a neighborhood parade culminating in a party every year. Neighbors, friends, my wife’s clients, friends of friends, all come. It’s a pretty big deal. The kids decorate their bikes, dogs wear flag bandanas; we’ve had fire trucks, ponies, convertibles with waving Forest Springs queens, floats, etcetera. Like Christmas, it’s a time of the year when I am confronted with seeing quite a few folks I only see once or twice a year. And I’ve grown to dislike it.

So, What Do You Do?  It’s an unavoidable question. Behind the weather, asking an acquaintance how they occupy themselves is one of the oldest and simplest forms of initiating social small talk. In the earliest days of people finding out you are a writer, you get a variety of reactions: eye rolls, feigned interest, flight, questions about whether you want it made into a movie, questions about what you think of the most recent hot book (in case you’ve been living under a rock, it’s currently 50 Shades of Gray), and so on. I was just beginning to get used to this variety, although it took me a while to openly admit I was writing epic fantasy (people immediately go to dragons and hobbits when they hear the two words used together). Then I finally crafted a quick summary of my work that most find acceptable if not interesting.

But time marches on, and as I said, most now know of my writing. So what’s the problem, right? Well, it’s sort of hard to describe, but I have a feeling many of you writerly types out there will get it. So please bear with me while I set this up.

You Only Get Three Things: A very good friend of mine was my first beta-reader outside of family. After he finished the trilogy, we spent a whole day discussing the books. It was wonderful. He was one of the first to make me realize this writing thing was serious shit—like my life’s calling. During that discussion, I was bemoaning the aforementioned reactions to telling people socially (eye rolls, et al), and he said, “you’ve got to make it one of your three things.” I raised my brows and made one of those inquiring Scooby Doo noises.

My friend went on to explain his theory about how your social image is a reflection of you viewed through the prism of three, and only three, labels—if you’re lucky. Some folks only get one or two. To demonstrate, he gave me his and mine. His were: 1) Gay with Longtime Partner (always a powerhouse, as far as labels go); 2) Stewardess (his own name for his paying gig of airline attendant); and 3) Jewelry Guy (he’s actually a talented jewelry designer, but since his family is in the jewelry biz, he only gets ‘guy,’ and not ‘designer’).

He said mine at the time were: 1) Mo’s Husband (in our social circle my wife has, and always will have, the better and more visible image); 2) Carpenter (I have a pretty good rep here); and 3) Lumber Guy (even though we previously ran a business that did more than just sell lumber, this is what sticks—this guy knows about, and can procure, lumber). My friend insisted, beyond the closest circle of friends and family, these three are all the labels society is willing to allocate. Trying to add a fourth is impossible. To add new one, an old one has to go.

So the idea is to use what little influence you have on your own labels to make at least one of your three into what really describes your heart’s desire. I started telling people I was a WRITER, dammit–actively seeking to make it one of my three (hoping Lumber Guy would drop away, which it pretty much has). And I actually did it! Over time, and with some effort, I am now known as a writer.  In most of my circles, it’s pretty much become one of my three (if not number one). Again, you might ask: What’s the problem?

The Well-Meaning Inquisition: Let’s get back to the Fourth of July. Here came the folks I only see once or twice a year. They see me, sort through the labels they recall, find the one they feel is most interesting (or meaningful to me if not interesting to them), and say, “So, how’s the book coming?”

Don’t think I don’t appreciate the effort. It really is well-intentioned, and I’m glad it’s become the most prominent of my three. But am I really supposed to tell them I just finished a third revision of my book three, and that I’m excited by some of the rejection feedback I’ve recently gotten on book one, and am gearing up for yet another rewrite of the opening? Or that I have been getting some pretty good feedback from betas on my fourth manuscript, which is a prequel to the trilogy they’re probably uninterested in?

They want me to tell them the book is done, and soon to be published! And, since I finished a draft in June of ’09, they’ve heard me talk about how I’m still plugging away for four Fourths now (you don’t often get to say, “for four Fourths,” and have it make sense, btw). I understand they don’t really want details, and anything I tell them culminates in “still not published.” Then they give me sad eyes. Or phrases like, “Well, hang in there,” or “At least you still have carpentry, right?”

What Do They Know? That’s just it. They know one, two, or three of my labels. It’s very superficial, but it’s not their fault. I only know one, two, or three of their labels, too. They can’t know that my writing journey has been the greatest of my life, and that the past year has been one of my proudest. They don’t know how close the work is finally getting to being ready, how I now have a column in the Writer Unboxed newsletter, or how prestigious WU is. They don’t know I’ve met so many wonderful friends in the writing community, how I feel so appreciated and supported. They can’t know that my gut is finally telling me this trilogy might really find an appreciative audience—that it might not only be enjoyed by readers, but will affect some of them, leaving them moved and thinking big thoughts after reading the final page.

And since I can’t find a way to easily explain all of this in the allotted time—at least not without their eyes glazing over—when they ask, “So, how’s the book coming?” my answer is a smile and a simple, “It’s coming along. Thanks for asking!” Then I ask them if I can refill their drink or fetch them another beer, and I get the hell outta there.

How about you guys? What are your three things? Is WRITER one of them? How do you handle, “So, how’s the book coming?”

33 comments on “Labels: You Only Get Three”