I recently read a blog post on the topic of the proliferation of empowered warrior women by Jane Kindred, and I haven’t been able to get it off my mind since. I’ve come to respect her since reading her debut fantasy, The Fallen Queen, which I reviewed for my gig at ReaderUnboxed. In her post, Jane points out that making females as violent and physically adept as males does not empower them. Indeed, since it’s a fact that women are generally smaller and not as physically strong as males, the literary trend of making them so could be viewed as damaging. She points out that women could be – and should be – shown as equals in ways that don’t involve physical ass-kicking. Using their brains, for example–Duh, right? One of the post’s commenters advised fantasy writers to think long and hard about why they would want to portray women that way.

So I have been thinking. So much so that I needed to write about it, just to clear my head.

Got Warrior Chicks? For anyone reading this who hasn’t read my fiction: warrior chicks, I haz ’em. You might say they feature prominently, in all four of my finished manuscripts. Oh yeah, and they’re kickass, if I do say so myself.

I call my work historical fantasy, but it is probably closer to alternate history than fantasy. There is no system of magic. Some readers might glean that my Gottari are based on the Germanic tribe of the Goths, and their Tiberian foes will be quite recognizable as the ancient Romans. So the most fantastic thing about the books is my creation of the Skolani, and their insertion into this otherwise recognizable alt-historical world. The Skolani are an all female Teutonic warrior sect pledged to an alliance with the Gottari. More simply put, they are a tribe of kickass warrior chicks.

Where did the Skolani come from? I read a lot about the Amazons after reading (and loving) Steven Pressfield’s The Last of the Amazons. Much later, while researching the Goths for the books, I read a fifth century treatise by a Goth named Jordanes called The Origin and Deeds of the Goths. Jordanes lays the claim that the Amazons of Greek myth were actually the abandoned wives of the Goths, who had left their women on the northern coast of the Black Sea to conquer Persia and Egypt–a premise I found amusing as well as interesting. From there, I loosely based the tribe on an amalgam of several Amazon myths, the American Indians (particularly the Great Lakes tribes), and the Sarmatians (an ancient matriarchal nomadic warrior society of the Black Sea region, from which I took the name Skolani, which means ‘We fight to be free’). They live in a Kabitka, which is a cross between a nomadic horse-culture tent-camp and a woodlands American Indian village.

Skolani girls receive martial training from the time they can stand and hold a weapon, and ride from the day they can stay in a saddle unaided. The biggest and most athletic are chosen to receive blades, and aspire to be risen to the ranks of the Blade-Wielders, the most vaunted warriors in my world of Dania.

Just your everyday garden-variety asskickers. I didn’t want the Skolani to be super-humans, or invincible, or lesbians, or asexual, or man-haters, or secretly wanting/needing men. I wanted to them to be a collection of individuals. They are both good and bad, wise and foolish, strong and fallible. In other words, I endeavored to create interesting, multidimensional characters that readers–both male and female–would enjoy getting to know.

But why? So back to my point: why did I create the Skolani? Since reading Jane’s post I’ve pondered, looking at it from every angle–again. As I said, I thought long and hard about them from the inception. I can honestly say I did it because I wanted female characters who were on the same footing as the male characters. So, to Jane’s point, did they have to be kickass warriors to be on the same footing?

The answer I’ve arrived at is, yes. My alternate history world is a violent one. When I say on the same footing, I don’t mean simply being as smart or as strong. I wanted to totally eliminate the need to justify having my male characters perceive my female characters as total equals. Never once, in any of my work, does a Gottari male utter a misogynistic or chauvinistic phrase about or to a Skolani female. Never does anyone utter anything resembling, “Oh, that is such a typical female thing to say/do.” 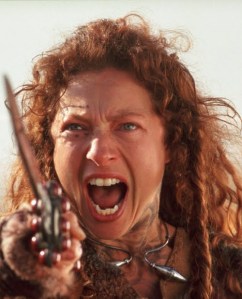 Strong Females: With the addition of the Skolani, I hoped to create a genuine historically-correct atmosphere in which my male and female characters could approach one another with the same respectful consideration as two males would–to have the opportunity for males and females to appraise one another both inside and outside the realm of sexual attraction. I wanted my male and female characters to be friends, comrades, occasionally lovers, or even esteemed foes, all within the context of a believably historical setting. I still believe that maintaining this intersexual dynamic in my setting would’ve been difficult without my creation.

I believe my kickass warrior chicks make my story more plausible, not less.

My Inspiration: Anyone who knows me well and has read my work can see that there is a lot of my wife in there. And, although she is not a Blade-Wielder, she is the most capable person I’ve ever met. Our relationship sprang from a friendship, and is founded on mutual respect. She has saved me from myself more times than I care to enumerate here. I often refer to her as the other half of my brain. I would honestly be lost without her. Although none of the Skolani are specifically based on her, in a way they are all modeled after her.

So, in a way, it is her fault I write about kickass warrior chicks. In a very real way, the trilogy is a tribute to her. So thank you, my Anam Cara.

13 comments on “Regarding Kickass Warrior Chicks”